Summary of NHS Horizon’s Webinar with Professor Amy Edmondson, May 2020.

NHS Horizons is an organisation set-up to tune into the latest change thinking and practice in healthcare and other industries around the world, they positively impact people’s lives by building a generation of transformational leaders. We have been extremely lucky to work in this arena.

Running a weekly webinar on Wellbeing, they invited Professor Amy Edmondson to talk about improving Psychological Safety during times of rapid change, please find below a summery of the webinar, which we think you may find very useful.

The world’s leading expert Professor Amy Edmondson highlighted the types of environments and how the role of leaders will be critical for all organisations going forward. Over 600 delegates heard Professor Edmondson emphasise that leaders particularly in a pandemic must: “Paint reality and give hope “.

Outlining how the role of leaders has fundamentally changed from being the boss with authority, perhaps based on knowledge or expertise to one, where their role is to create an environment where people can give of their best through leaders shaping the protocols, guidelines, direction and above all getting agreement to move forward in a unified way.

Interestingly she gave a comparison with the way in which the military operates by getting teams to work with teams rather than relying on a top-down hierarchical approach.

A recent speech by general Nick Carter, Chief of the General Defence Staff, made this very point also highlighting it was this approach that allowed them to create in a period of two weeks, the Nightingale hospital in East London. He emphasised as well that allowing individuals to deploy judgement with high degrees of discretion was critical as part of this process.

To Respond in a time of rapid change it was inevitable that organisations would go through a series of phases, the first of which, to try and identify what needed to be done and what the best way of organising that would be. Inevitably in this phase long hours may well be the norm, with heroic actions being seen, often at great personal cost. This led to some spectacular short-term results.

Professor Edmondson pointed out that this was unsustainable. The only way to create a new norm that was viable, was to develop effective teams that could innovate, recognise they worked in the world of uncertainty, the need for complex interdependency is to be clarified, to experiment with new ways of working, and recognise that smart failure is the way to make progress. Peer support therefore becomes important as does cross silo working.

Central to all of this was creating a psychologically safe environment where it was safe to speak up, safe to suggest new ideas, safe to ask challenging questions and safe to fail if one learnt from the failure. Another way to separate out what leaders needed to do was outlined in her two descriptions she entitled hardware and software:

Hardware defines the scoping out of tasks, creating new structures, identifying interdependencies, and highlighting the difficult tasks that need to be tackled. Critically prioritising those tasks which have interdependencies and therefore need strong team working and those tasks which, could be left to individuals or small groups without the need for constant affirmation, clarification or consultation.

This would allow teams to work on those areas which needed a collective and perhaps diverse perspectives to allow problems to be solved and also to create forums that allowed understanding to be developed of the key areas that required cross silo working and those that didn’t.

This allows individuals to be empowered and allocates time tobe spent on the areas that require group problem-solving and those that don’t.

Software related to creating clarity over the purpose of a task or a specific piece of work, so everyone is clear what is at stake. By allowing the views, thoughts and concerns of those in a team to be aired and for those views to be considered and responded to appropriately, ensures that the best ideas can be obtained and that people feel valued to give their contribution.

WHAT PSYCHOLOGICAL SAFETY IS NOT!

In an almost contrary section Professor Edmondson highlighted what psychological safety was not.

She said it was not about being nice, because niceness often didn’t deal with the key issues, it wasn’t about creating an environment free from conflict, because often conflict revealed new thoughts or ideas, it wasn’t about a guarantee being in place that all ideas will be applauded, because clearly they can’t be, and that it definitely wasn’t about creating the permission to slack off. She clearly articulated as well that it was not a route to overshare or to continually challenge the goals.

For many in the audience this may well be the first time that she has been explicit about what psychological safety is not.

There were some interesting and valuable practical areas for consideration in terms of the actions and behaviours that leaders and managers could adopt.

One of the most powerful points Professor Edmondson made in this arena was to encourage everyone to consider whether they were aware of what they could do to make others feel psychologically safe. Recognising that Psychological safety will be at different levels across organisations and between teams and perhaps within teams, there was a need to use every interaction as an opportunity to build psychological safety.

This might start with thinking about asking more questions rather than more statements being issued or instructions being given. Acknowledging to employees that this is a difficult time and that the changes are complex and volatile and therefore it is fine to acknowledge the fears and concerns that people have, also for leaders and managers to respond in a thoughtful empathetic way.

Further the way in which one asks questions could be by way of a humble enquiry rather than a much more challenging and direct enquiry ,so allowing people to genuinely believe they are valued, feel confident they are being listened to.

Professor Edmondson also highlighted the value of recognising and admiring courageous acts, acknowledge individual’s commitment and check-in directly, as to how people are feeling.

Leaders and managers need to be explicit about how the work environment is changing in complex ways and reminding individuals of the moral purpose of the work that they are undertaking.

There were so many questions submitted but one question that was really relevant at this moment in time is: ‘How should leaders promote Psychological safety in the virtual world we are now in’ Professor Edmondson suggested there is a lot of virtual events which are almost in the form of broadcasts, talking at people rather than listening to people, and this is becoming the norm.

She emphasised the value of leaders and managers, ‘listening’ in the virtual environment.

Looking forward there was a clear articulation of the need for managers to be both authentic and transparent, intentions are not as important as actions, she highlighted that intentions cannot be seen whereas actions are very visible!

Acting quickly where possible, taking risks, learning from them and updating colleagues and teams about changes in the process and the progress of work was therefore going to be an essential role for leaders in challenging times.

Smart Failure was a phrase used that resonated with the audience. The idea that one could try something new and rather than see failure as a reflection of incompetence it could be seen as a route for significant process and output improvements, but there needs to be a change in the mindset of leaders and managers, if this is to be useful and effective.

There is no doubt that smart failure has been in place during times of rapid change and this has led to agile working, teams learning very quickly, adaptions being made in response to failures and a willingness to work collectively removing the obstacles that hierarchy specialisms and levels of control generate. Professor Edmondson stressed the need to sustain this type of environment if the real value of these changes are to be profoundly embedded within organisations.

It is refreshing to see that the health service and other sectors which, rely on the way in which teams work and on the discretionary effort of staff, recognise the value of creating psychologically safe workplaces.

In the months ahead there will be new challenges for every organisation. It is critical that Psychological safety now becomes an agenda item for boards and managers and that the benefits that have been gained from having to change the way we work can be capitalised upon for the benefit of all going forward. 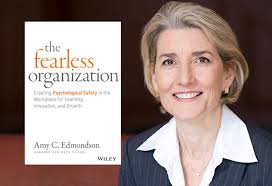